The mtDNA profile is known Jesse James. Find out if there’s a connection to crime in your past. 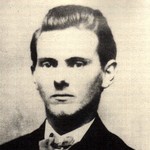 December 17th, 1869, Jesse James robbed a bank in Gallatin, Missouri and killed the cashier. While it was far from his first act of violence, this event changed the course of his life forever. In the days following the robbery, authorities officially declared him an outlaw. Rewards were offered for the capture of Jesse and his brother Frank.

Jesse eluded capture for many more years. Then one day, he was fatally shot by a fellow gang member, in a bid to claim the reward money. But, there was always speculation that another man was killed in his place, until DNA testing finally put those rumors to rest.

Who was Jesse James?

Jesse Woodson James was many things. He was an American outlaw, a guerrilla, a bank robber, a train robber and the leader of the James-Younger gang.

Jesse’s life of crime may have been precipitated by his brother Frank’s involvement in the American civil war. As the story goes, a teenage Jesse was ambushed at their farm by Union militiamen looking for Frank.

At the age of 16, Jesse followed his brother’s footsteps and joined the “bushwacker” group of Pro-Confederate guerrillas, and was involved in many atrocities and murders.

After the war ended, Jesse and Frank took part in numerous bank and train robberies as members of several gangs. Some claim Jesse was a modern day Robin Hood. But there was no evidence at all to show that he “stole from the rich and gave to the poor.”

The supposed death of Jesse James

Even with a $10,000 price tag of his head and at least two life-threatening chest injuries, Jesse managed to evade capture and death until 1882. He was finally killed by Robert Ford, a member of his own gang.

Jesse's death was far from that at the end of a Wild West movie. In fact, he was shot in the back of his head, while dusting a picture in his own living room.

It's said that Robert had previously arranged with the governor of Missouri to take down Jesse in exchange for the reward payout. Hence, Robert and his brother Charley were pardoned from hanging even after they were convicted.

The public was transfixed by Jesse’s death. The Ford brothers re-enacted the events of his death in a travelling show. But, even that didn't put a stop to the rumors that another man had died in his place, and his supposed death was all a scam to allow Jesse to escape justice.

One man, J. Frank Dalton, claimed to be Jesse. He even had several injuries (bullet wounds, a collapsed lung, damaged fingertip and burned feet) that resembled the characteristics of the real Jesse. But, his recollection of earlier life events did not stack up when questioned by Jesse’s relatives.

Solving the mystery with DNA

More than a 100 years later, scientists sought to put to rest the speculation surrounding the death of Jesse using DNA tests. They exhumed the presumptive remains of Jesse from the grave at Mt Olivet Cemetery where his body had been reburied in 1902. Samples were also taken from his original grave at the James’ family farm.

Mitochondrial DNA (mtDNA) was the DNA type of choice. MtDNA is strictly maternally inherited (from mother to child), so remains unchanged from generation to generation through the maternal line. Blood samples were taken from two maternal descendants of Jesse’s sister Susan to use as references. These two individuals would carry the same mtDNA profile as Jesse.

Three regions of the mtDNA genome can be analyzed – the coding region and two non-coding regions called HVR1 and HVR2. Often just the HVR1 profile is sufficient to confirm potential maternal relationships.

The HVR1 profiles generated from the two molar teeth taken from the reburial site and the hair samples from the original burial site were identical. This indicated that they came from the same person.

This profile was also an exact match to the profile generated from the two reference samples. This confirmed that the remains buried at the James’ farm, and subsequently moved to the Mt Olivet Cemetery, belonged to someone from the same maternal line as Jesse.

Of course, it’s possible that these remains belonged to another maternal relative, rather than Jesse. But, given the scientific evidence and historical records, it’s very likely that Jesse was indeed murdered in his own home in 1882.

Are you related to this famous outlaw?

Maybe you choose to believe that Jesse lived an interesting life, in an ordinary house, in an ordinary town, as depicted by Brad Pitt in the film “The Assassination of Jesse James by the Coward Robert Ford.” Or maybe you think that Robert Ford did America a favor by stopping this infamous outlaw.

Regardless, we now know the mtDNA of Jesse James. If you have taken the DNA Maternal Ancestry Test, you can see if you may have descended from the same maternal lineage as this infamous American outlaw.

Are you ready to explore your ties to the great American Outlaw Jessie James?