Are you a descendant of the Irish High King Niall of the Nine Hostages?

He was the fearless High King who battled the English, the Scots, the French, and the Romans. Taking hostages, striking fear into the hearts of their enemies, and even kidnapping Saint Patrick bringing him to Ireland as a young slave. But historians often speculate his story was just a legend, and Niall of the Nine Hostages was a mythical figure that never really existed. Here we describe the DNA studies that confirmed the great genetic dynasty of this prehistoric Irish King, and the existence of more than 3 million “descendants of Niall.”

The legend of Niall Niogiallach

Legends speak of Eochaid, a High King of Ireland, who ruled with his beautiful dark-haired queen Mongfind. Until one day the king fell in love with one of his hostages, a maiden named Cairenn. Of course, the queen grew to hate Cairenn.

When she found out that Cairenn was carrying the king’s child, Mongfind forced her to work hard, hoping she would lose the baby. But Cairenn was strong and able. One day on her way to the well to fetch water, she gave birth to a son. Deathly afraid of Mongfind, Cairenn refused to even touch the baby. Instead, she picked up her water bucket and returned to the house.

A poet named Torna discovered the abandoned baby. When Torna touched the infant, he had a vision. He knew who the child was, and that he would grow up to be king. Such was the beginning of the life of Niall Noigiallach aka “Niall of the Nine Hostages” – hated by the queen, unwanted by his mother and accidentally discovered by a kind-hearted soul. The boy who grew up to be one of the greatest of Irish kings.

Niall was the High King of Ireland in the fifth century. He consolidated his power by leading raids on the Roman Empire.

At each conquest, he took a hostage from the rival royal family to ensure his domain. The number of hostages amounted to nine, earning him the name Niall of the Nine Hostages. Saint Patrick was said to have been kidnapped and brought to Ireland as one of his hostages during his raids.

Niall was the founder of the dynasty Uí Néill “descendants of Niall,” one of the most powerful dynasties of ancient Ireland, ruling Ireland until the 11th century. He had at least 12 sons, many of whom became powerful kings, especially in the northwest.

In fact, all but two of the High Kings at Tara were descendants of Niall. According to tradition, Niall died outside of Ireland. Some sources indicating that he died at sea fighting Eorchaid mac Enna, the King of Leinster and others suggesting that he died fighting against the Picts in Scotland.

DNA proof of a legend

But, Niall existence has always been doubted, since there are no written records from the time of his rule. Sources for Niall’s existence as a historical king come from Lebor Gabala Erenn (a collection of narratives of the history of Ireland) and the Annals of the Four Masters, chronicles of medieval Irish history. They speak of legendary tales of the Adventure of the Sons of Eochaid Mugmedon, and The Death of Niall of the Nine Hostages.

Historians have often speculated that Niall was just a mythological figure, a mere legend, until researchers from Trinity College in Dublin put these claims to the test using DNA analyses.

These researchers looked at Y-DNA STRs (short tandem repeats), regions of DNA that are repeated many times over, which are useful for tracing paternal lines.

Y-DNA is passed down from father to son. This means all men who have descended from the same paternal lineage have the same or very similar Y-DNA profiles.

They generated Y-STR profiles of 796 Irish men from all over Ireland, and found a unique Y-DNA STR marker profile in a large proportion of Irish men.

This profile was more frequent in the men that came from the northwestern part of the island, particularly the historical regions that were once under Uí Néill power. It also associated strongly with surnames that belonged to the Uí Néill lineage.

Are you a descendant of this great Irish King? 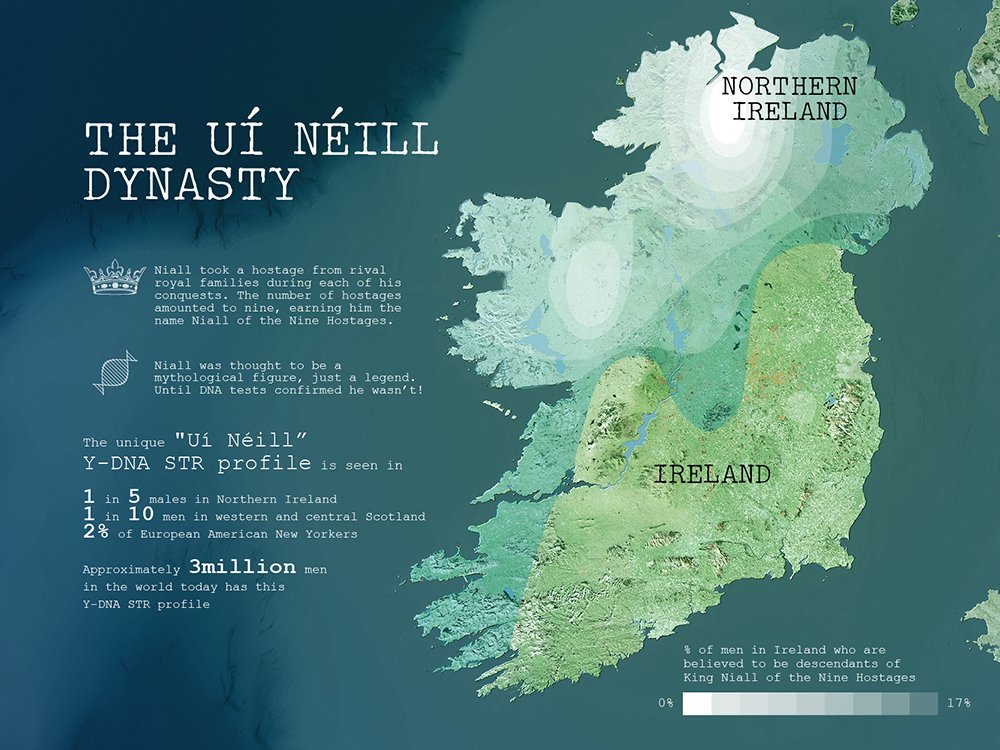 What does this mean? DNA evidence is in agreement with oral traditions of Gaelic Ireland about Niall. Niall, dubbed "one of the most powerful kings to ever hold office" by Annals of the Four Masters, really did exist.

Today, one in five males in Northern Ireland carries this unique Y-DNA STR profile, and are likely descendants of Niall. Even outside of Ireland, 1 in 10 men in western and central Scotland also carry this profile. So do 2% of European American New Yorkers, perhaps due to the historically high rates of Irish emigration to North America.

According to this study, Niall of the Nine Hostages may be the forefather of approximately three million men in the world today. If you have taken the DNA Paternal Ancestry Test, you can see if you have also descended from the Uí Néill lineage founded by the great Niall.

Are you ready to find out if you are one of the 3 million descendants of King Niall?