Your Y-DNA contains both slow and fast-changing genetic markers. DNA SNP chips (used by many of our competitors) detect slow-changing SNPs, which are excellent for tracing ancient ancestry but useless for anything recent (i.e. the last few hundred years). So if you want to use your DNA to help build your family tree, you need to look at fast-changing genetic markers – STRs. And that is exactly what our test detects – STRs found on your Y chromosome.

Our paternal ancestry test can analyze 20, 44 or 101 different Y-DNA STRs. The choice is yours, and the more you choose, the higher your resolution will be. Compare your Y-DNA to published data from hundreds of famous historical figures and ethnic groups around the world. Our test even allows two males to determine how many generations ago they shared a common ancestor.

Important! This test can only be taken by MALES, as only males have Y-DNA. Females wishing to trace their own paternal lineage must test the Y-DNA of a direct male line relative.

What is the Y-DNA STR test?
The Y-DNA STR test is a useful technique used in ancestry, relationship and forensic applications. The test analyzes markers in the Y chromosome known as STRs or ‘short tandem repeats’. STR markers are short segments of DNA (2-13 nucleotides in length), which are repeated multiple times. STR analyses measure the exact number of repeat units. The number of repeats differs between individuals because STRs change frequently. The more closely related two individuals are along their direct paternal line, the more similar their Y-DNA STR profiles will be. Y-DNA STR tests can be used for forensic applications, investigating relationships, tracing distant male relatives who may have descended from the same paternal lineage and identifying links to famous people. It is a simple test that can provide you with rich information about your paternal lineage.

Methods and analysis of Y-DNA STR testing:
The Y-DNA STR Marker test uses a technique called polymerase chain reaction (PCR) to examine a defined set of STR markers in your Y-DNA. This technique determines the number of repeats at each marker tested – either 20, 44 or 101 markers, depending on the requested analysis. When two individuals take the Y-DNA STR marker test, their STR numbers can be compared to see if there is a match. The confidence with which the Y-DNA STR test can predict a relationship between two individuals increases as more STR markers are tested. A calculation called “TMRCA” (time to most recent common ancestor) can be performed to estimate how many generations ago the two males likely shared a common paternal ancestor. Comparing more Y-DNA STR markers will provide a higher stringency comparison and a more precise TMRCA calculation.

Customers can select how many Y-DNA STR markers they would like to have analyzed: 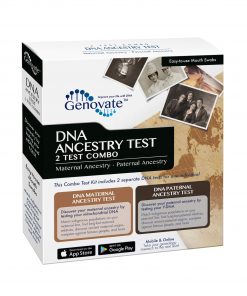 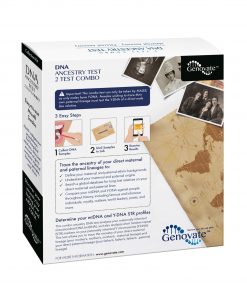 Discover your ancestry by testing your mtDNA and Y-DNA (males only). 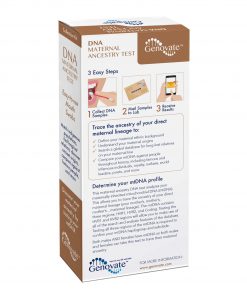 Sequence your mtDNA to accurately trace your maternal ancestry